The Shrine of Our Lady of Trois-Epis, Alsace - France

We welcome you, pilgrim and visitor, to this place where, in the person of Mary, God has visited Alsatian soil. In a natural setting, amidst lakes, vineyards and castles, "Our Lady of the Three Ears of Corn" invites you to meditation and prayer. 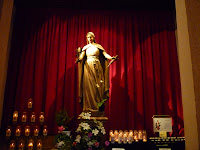 Here, on May 3, 1491, Mary appeared to Thierry Schoeré, a blacksmith on his way from Orbey to the market in Niedermorschwihr to buy some corn.
She was holding an icicle in one hand, a portentous symbol of sorrow and desolation; in the other, she held three beautiful ears of corn on a single stalk, bringing promise of abundance and blessings. She told the blacksmith:
"Fear not, make haste and go as quickly as you can to Niedermorschwihr. Tell the inhabitants that they should mend their ways and journey to this mountain in procession".
But Thierry Schoeré was afraid, he told no-one a word of what had happened... it required a sign, a sack of wheat that it was impossible to lift from the ground, symbolising all the fears that paralyse us... Only then did he dare to deliver the message of life Mary had given him.

As early as 1491, a modest wooden chapel was erected on the site of the apparition, then replaced in 1493 by a stone building. A priest, assisted by a hermit, ministered to the shrine until the Thirty Years War (1618-1648).
The chapel was burnt down in 1636, but rose from its ashes with the arrival of a religious community. Several communities followed one after the other until the Revolution, when the shrine was closed. It was restored to worship in 1804.
The Redemptorists settled in Trois-Epis on July 11, 1912 and have continued to spread Mary's message ever since then.

The chapel of the apparition
A historic site, but above all a place dedicated to prayer and meditation... On entering the chapel, pilgrims are welcomed by a statue of Mary dating from 1950, which calls to mind the two symbols of the apparition.
As you move towards the choir, two discoveries await you above the high altar: a pietà dating from the late XVth century, "le petit vieux image miraculeux" and a painting representing the Visitation, for it is to this episode of the life of the Virgin Mary that the chapel is dedicated. In the choir, two paintings depict the Apparition of 1491.
On the left-hand altar, a statue of Saint Antony the Hermit is a vivid reminder that he Antonines spent more than a century at Trois-Epis. On the right-hand altar, another statue, carved in wood, represents Saint Antony of Liguori, the founder of the Redemptorist congregation. The numerous thanksgiving plaques covering the walls of the chapel are a tribute to Mary for the many graces received through her intercession. At the far end of the chapel, visitors can admire another statue of Mary which was rescued from the fire of 1636.
Before finally leaving, you will see a stone lodged between the choir and the nave, bearing the date of 1693, indicating the year the chapel was built.

Links to this post
Labels: Alsace, Our Lady of the Three Ears of Corn, Trois-Epis

Pope Benedict XVI's Prayer Before the Mariensäule in Munich

Holy Mother of the Lord!
Our ancestors, at a time of trouble, set up your statue here, in the very heart of Munich, and entrusted the city and country to your care. They wanted to meet you again and again along the paths of their daily life, and to learn from you the right way to live, to find God and to live in harmony. They gave you a crown and a sceptre, which at that time were symbols of dominion over the country, because they knew that power and dominion would then be in good hands - in the hands of a Mother.
Your Son, just before his farewell to his disciples, said to them: "Whoever wishes to become great among you must be your servant, and whoever wishes to be first among you must be slave of all" (Mk 10:43-44). At the decisive hour in your own life, you said: "Here I am, the servant of the Lord" (Lk 1:38). You lived your whole life as service. And you continue to do so throughout history. At Cana, you silently and discreetly interceded for the spouses, and so you continue to do. You take upon yourself people's needs and concerns, and you bring them before the Lord, before your Son. Your power is goodness. Your power is service.
Teach us - great and small alike - to carry out our responsibilities in the same way. Help us to find the strength to offer reconciliation and forgiveness. Help us to become patient and humble, but also free and courageous, just as you were at the hour of the Cross. In your arms you hold Jesus, the Child who blesses, the Child who is also the Lord of the world. By holding the Child who blesses, you have yourself become a blessing. Bless us, this city and this country! Show us Jesus, the blessed fruit of your womb! Pray for us sinners, now and at the hour of our death. Amen!

Subscribe to «Holy Prayers and Devotions» by Email via FeedBurner